Chu Kheo Cao hamlet is a Hmong village located on a high mountain in Khun Ha commune, Tam Duong district, Lai Chau province. For a long time, people in the village still keep cattle near their houses and roads, so the environment in the village is very polluted and there is a high risk of disease. Stemming from that reason, within the framework of the project “Adaptive livelihoods to ensure food security and climate change adaptation for vulnerable communities in Vietnam” by Bread for the World (BfdW) and a number of local sources, the The Consultative Institute for Socio-Economic Development of Rural and Mountainous Areas (CISDOMA) in collaboration with the Management Board of Community Development Programs in Tam Duong and Lai Chau districts to implement “Composting fertilizer” model. This is a model of protecting the environment, preventing diseases, enriching the land, improving the ecosystem of the field and contributing to creating additional income for farmers.

When implementing the model, the project managers held consultative meetings with people in the village, mobilized people to participate in the implementation of the model and guided them how to do it. The project supported to build 3 composting tanks evenly distributed  in the village. Households participating in the model collected animal manure, organic waste and straw in a composting layer in compost pits with probiotics provided by the project. The incubation period took about a month to yield compost. Manure, easily disintegrated organic waste, green manure and straw are composted in layers, bio-products are irrigated after each layer, helping the process of composting faster and ensure complete decomposition. Compost is microbial organic fertilizer, which enriches, softens  and improves the soil. Also after composting, pathogens and weeds in the composts are destroyed. Therefore, composting is not only important in animal husbandry but also very important for cultivation, helping both cultivation and animal husbandry to develop sustainably. Initially only 20 households participated, but currently 81 households (100% of households) in the village have participated in the implementation of this model.

In terms of economy, the cost of building compost pits and probiotic is paid by the project team at the first phase of the project while local people provide the labor. Currently, farmers are composting and selling compost for 250,000 VND/m3, and Chu Kheo Cao hamlet has sold 20 m3 of compost. After 6 months of implementation, Chu Kheo Cao alone has collected 5 million Vietnamese dong. Farmers have set up a fund to buy bio-products for subsequent composting periods and loan to 5 households in the hamlet to increase production.

In terms of environment, environmental sanitation in the hamlet is cleaner as no more animal waste is accumulated in the roadside in the hamlet. The model of microbiological composting has initially proved that this is an effective solution that can be implemented at low cost, contributing to clean the environment and create additional income for farmers.

Mr. Cu A Chinh, a 23- year- old man, from Hmong Ethnic group, Chu Kheo Cao hamlet, Khun Ha commune and Tam Duong district shared: “Compost is different from un-composted fertilizer, it is more porous and lighter, easier to transport and odorless. A lot of people order composted fertilizer. The hamlet has sold it 3 times and earned 5 million already. Since composting, the environment in the hamlet is much cleaner. Now the hamlet roads are clean, the households don’t see any leftovers like before.”

Microbiological composting is a very important model in improving soil, restoring soil ecosystems, connecting animal husbandry and cultivation for long-term economic efficiency. On the other hand, the model contributes greatly to ensure environmental sanitation in the hamlet and generates additional income for people. Thus, in terms of economy, the model contributes to reducing the vulnerability of climate change because people have better incomes. The model also contributes to food security and increases resilience after a disaster for it increases the local’s income. This model is easy to do and economically and environmentally sustainable. It should be widely applied, especially in areas where livestock remain concentrated in the population areas. 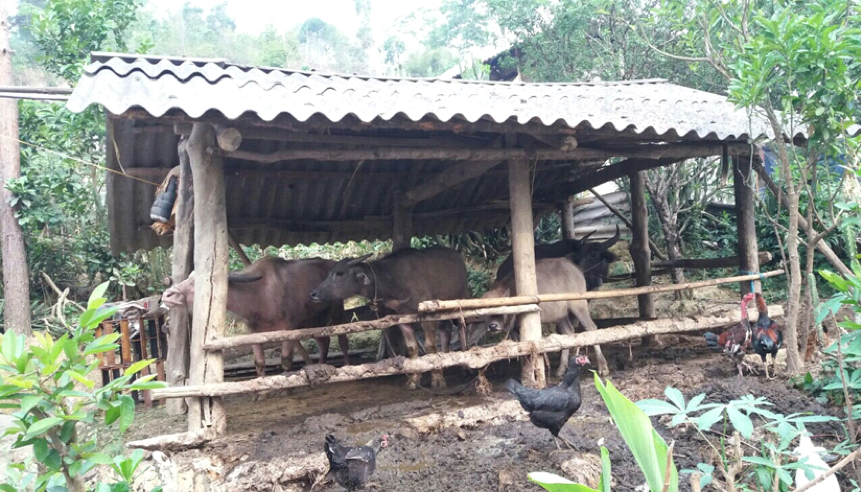 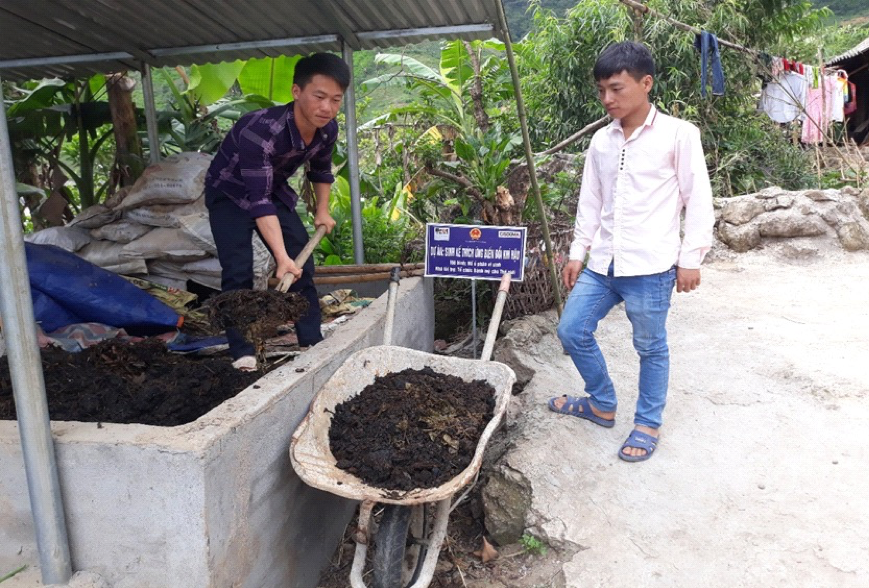