Composting post-harvest straw: A solution to contribute to clean the air of Hanoi City

Composting post-harvest straw: A solution to contribute to clean the air of Hanoi City

Rice fields and straw dunes have long become familiar images associated with life in rural areas of Vietnam. However, at present, many farmers still burn straw after harvesting rice, because they think that it is quick, reducing labor use, destroying some pathogens and could collecting rice straw after the rice crop; but they did not unforeseen this action not only causes air pollution but also increase the risk of traffic insecurity, respiratory diseases … According to a study by the Department of Natural Resources and Environment of Hanoi in 2018, there were still hundreds of thousands tons of rice straw burned after harvest, such as Dong Anh of 20,990 tons, Dan Phuong of 10,471 tons, etc.

Realizing the urgency of need to bring a solution to farmers to handle straw effectively, sustainably, contributing to reducing the burning of rice straw after harvest, thereby reducing air pollution for Hanoi City, the Consultative Institute of Social and Economic Development for Rural and Mountainous Areas (CISDOMA) in collaboration with the Center for Living and Learning for the Environment and Community (Live and Learn) and Dan Phuong District Farmers’ Association, implemented the action to reduce rice straw burning. This action was a component of the “Clean Air – Green City” project funded by the United States Agency for International Development (USAID). The action was implemented in 9 communes of Dan Phuong district including: Lien Hong, Tan Lap, Ha Mo, Tho Xuan, Tho An, Phuong Dinh, Hong Ha, Lien Ha, Thuong Mo and Thuy Lam commune of Dong Anh district, Hanoi City in the period from 9 / 2018-7 / 2019, initially brought practical effects. 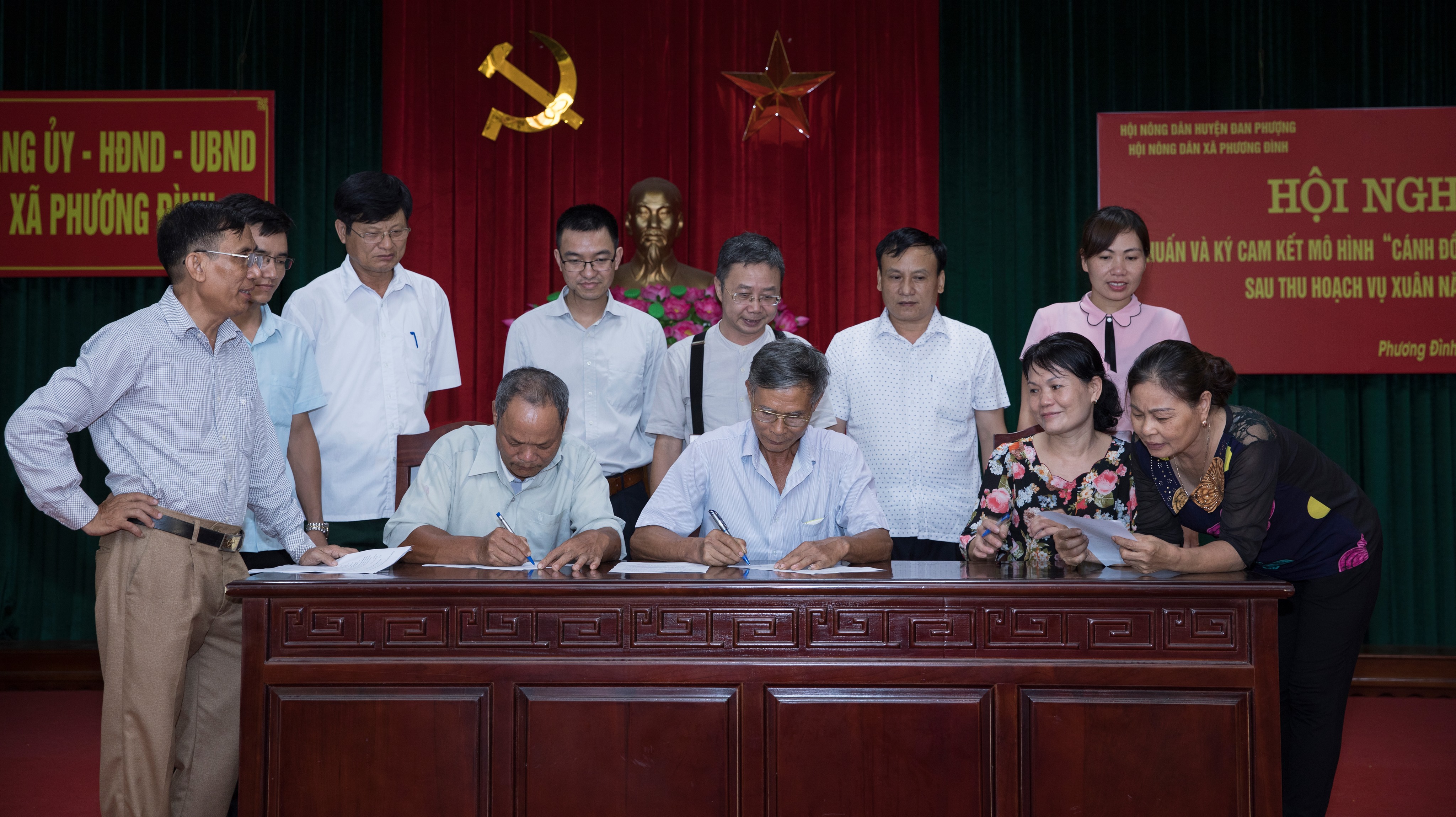 Applying participatory approach, CISDOMA conducted a survey to find out the situation, consulted with local authorities, partner organizations, and farmers, thereby identifying appropriate solutions to reduce burning local post-harvest straw which used probiotics to compost post-harvest straw into fertilizer. It can be said that the action was implemented comprehensively and extensively from communication activities, to technical trainings and provided local farmers with probiotics.

Combined with communication activities, the action also organized training courses for farmers. At the training classes, farmers were introduced to the technical process of using Fito-Biomix RR probiotics in composting post-harvest straw into fertilizer. Farmers can use this composition to handle rice straw in the field (with enough water) or to process the straw after piled (suitable for dry fields). Two easy-to-implement technical procedures could be done right in the household’s field.

In order to consolidate knowledge and let farmers understand the implementation process, after introducing the straw composting process, technicians directly guided and piloted these 02 processes in the fields of farmers in the action communes.

Not only that, people was also very excited because they were supported with probiotics to compost rice straw. 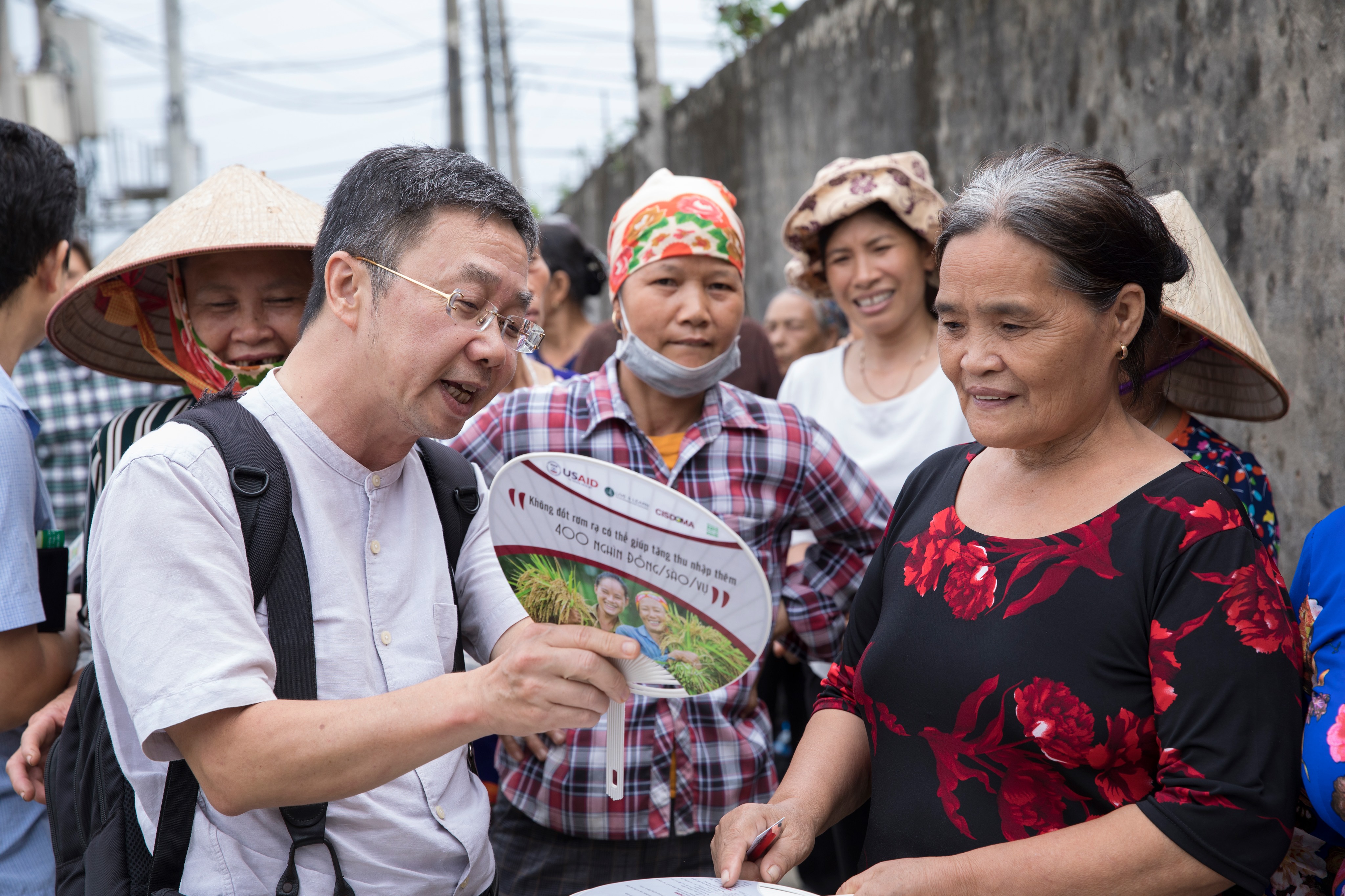 At the end of the action, 2,383 households in 9 communes of Dan Phuong district registered and signed a commitment not to burn straw. The total registered area of not burning straw was 364 ha. The action provided 2,016 kg of probiotics to farmers. Communes have handled 335 hectares.

The introduction of probiotics products into rice straw handling contributed to changing farmers’ cultivation practices, not only to help to improve the soil, improve economic efficiency in agricultural production but also limit environmental pollution, contributing to clean the air. In addition, it was necessary to overcome the phenomenon of organic poisoning for rice after transplanting, promising a bumper crop, bringing a more prosperous life for farmers.